In category theory, an isomorphism is a morphism that can be reversed by an inverse morphism. But let’s not get too bothered by what exactly this means and what it might imply, instead we’ll jump straight to Haskell:

When applied to two not necessarily different Haskell types a and b, an isomorphism comprises two functions f :: a -> b and g :: b -> a such that f . g == id and g . f == id. The existence of f and g shows that both types are basically equivalent in the kind of information they can express – the other type is always just a “lossless” conversion away.

I suppose it’s best to start with a few simple examples so you can get a feel for the concept:

Sounds reasonable enough. However, there are some somewhat perplexing (at first glance, anyway) isomorpishms between the Integer type and a few composite types. That’s what this post is about!

Integer is isomorphic to Maybe Integer. Think about it for a minute before reading on – if it throws you for a loop, you’re not alone.

When I was first confronted with that statement, I was a bit confused because the obvious Maybe Integer -> Integer function – simply freeing the integers from their Just shells – seemed to leave no “space” for Nothing in the function domain.

The trick is to shift things around a bit:

As you can see, when converting Integers to Maybe Integers, we return Nothing for 0, but because we need to acount for the Just 0 case in the inverse function, we shift all positive integers a spot to the left. The inverse function then shifts them back to the right and all is well.

Either go Right ahead or be Left behind

Things get a bit more tricky when we try to come up with an ismorphism between Integer and Either Integer Integer. A simple shift won’t get the job done this time.

Our Integer -> Either Integer Integer function needs to somehow split up the set of integers such that both the Left and Right cases get slices of the pie. The inverse function then needs to reverse this split. Considered in isolation, this would be trivial – we could split based on parity and reverse the split by simply unpacking the value fenced in by either the Left or Right constructor.

That’s just a way of encoding Integer values as Either Integer Integer, though, not an isomorphism. For example, consider the other direction: If we feed a Right 1 through itoe . etoi, which should compose to be equivalent to id if we had an isomorphism on our hands, what we get back is Left 1!

Let’s try again. Each of our two functions, operating on arbitrary output values of its inverse, must be able to “fill” its domain fully, otherwise there will be a case where we cannot get the same value we put in out again.

Sticking with the basic structure from above, we can modify the itoe function to “compress” its input Integers: Even numbers are halved and wrapped in Right, odd numbers are decremented (to make them even), then also halved and wrapped in Left. Knowing that Left values correspond to odd numbers, the inverse function etoi can now reverse our previous transformation steps without any loss of information. Going the other direction, etoi outputs odd numbers for Left inputs, enabling its inverse itoe to compute the original value correctly.

This time around, let’s actually prove that these function form an isomorphism. We’ll use equational reasoning for this, first (out of four cases) considering the etoi . itoe composition for odd numbers. Our goal is to show that id = etoi . itoe holds:

Showing etoi . itoe for even numbers works the same way, so I’ll skip that here. That’s two cases down, two to go – namely, we need to show that id = itoe . etoi for both Left and Right input values. Again, I’ll only show this for Right (in a more concise format than above) and skip the very similar Left case.

Division among your newly enlisted units

If we were only considering non-negative integers, the isomorphism between Integer and [()] would be fairly obvious: The Integer -> [()] function could be implemented as flip replicate ()2 with the inverse being length.

The same approach can’t Just Work™ here as scientists have yet to come up with a way to create lists of negative length. Due to of the scientists’ utter ineptitude, we first have take a bit of a detour and find an isomorphism between Integer and non-negative integers (or natural numbers, as they’re called by some).

Consider again3 the Either isomorphism from above, where we split the set of integers based on parity in the itoe function. There’s nothing keeping us from doing something very similar based on the sign, so we’ll do just that!

Shooting a disappointed look at the clearly impressed scientists, we can now use our iton and ntoi functions to assemble the isomorphism we set out to implement:

This is getting out hand, now there are two of them!

This is the last isomorphism we’ll fully implement, and it’s an interesting one: As it turns out, we can show that Integer is isomorphic to (Integer,Integer). This may sound a bit confusing on a conceptual level – you can’t make two out of one, can you? And then compress both back into one again, yielding the value you started out with? And vice versa?

However, when you think of this isomorphism in visual terms, it will quickly make sense to you:

Given a two-dimensional coordinate system, we can enumerate its coordinates (corresponding to our (Integer,Integer) type) by going in a spiral from the center successively outwards, yielding natural numbers (as long as we don’t get too dizzy to keep on track). If this mapping function is invertible, all that’s left to do is to chain it together with our iton and ntoi functions, and we’ve got our isomorphism.

Luckily, we don’t have to descend into the depths of number theory to try and come up with a mapping function. The scientists we’ve met earlier, in a desperate ploy to redeem themselves, have already done that: the Cantor pairing function4 is exactly what we’re looking for. The German-language edition of Wikipedia even gives a sample implementation – it’s written in Java, but can trivially be released from its miseryadapted to Haskell. 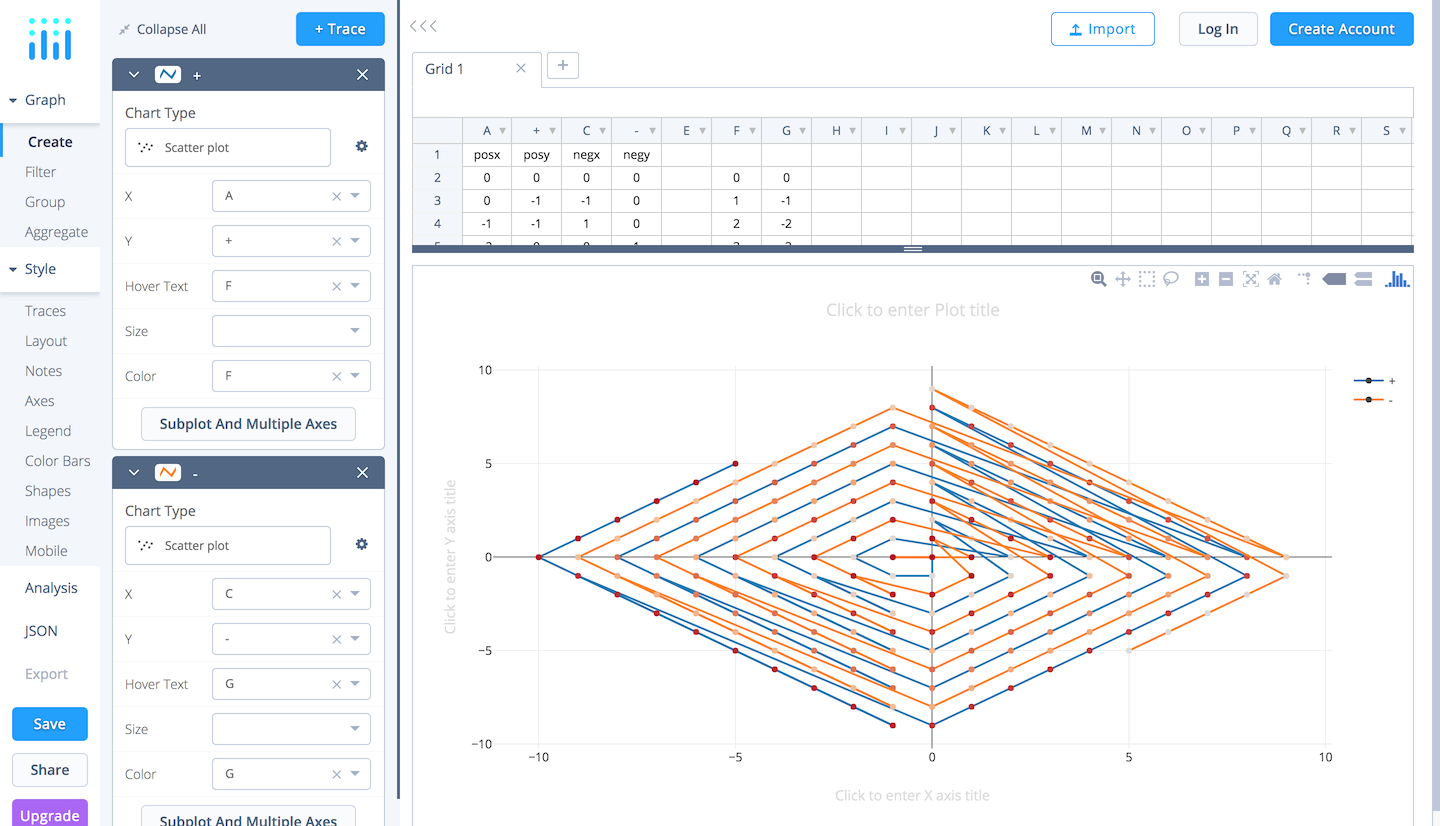 Even though the lines connecting the coordinate pairs are looking a bit broken up in some places because of how the math works out, you can clearly see the spiral pattern – larger integers are further from the origin and there aren’t any gaps.

A fistful of numbers

If you think that’s not cool enough, I’ll have Steven Pigeon, author of the article “Pairing Function” on Wolfram MathWorld, drop some knowledge on you:

To pair more than two numbers, pairings of pairings can be used. For example can be defined as or , but should be defined as to minimize the size of the number thus produced. The general scheme is then

In summary, by “stacking” this isomorphism an arbitrary number of times, we can show that an arbitrarily long tuple of Integers is isomorphic to Integer. In theory, there’s nothing keeping us from using the same logic to show…

For a few numbers more

…that Integer is isomorphic to [Integer]!

In practice, my attempts to write the required pair of functions have only resulted in the ability to encode [Integer] values as Integers – not the other way around. There are some other caveats, as well, which is why I’ve given up on getting it right:

This segues nicely into the final point I’d like to make: All of the above only works because Haskell’s Integers are arbitrary-length numbers. When instead using a fixed-length type like Int, depending on the size of the numbers you’re working with, you’ll sooner or later run into overflow issues which completely break the isomorphisms presented in this article. As mentioned a few lines further up, our implementation of the isomorphism between Integer and (Integer,Integer) already exhibits this behavior due to the use of the sqrt function.

Still, I hope these isomorphisms have refreshed your perspective on composite types and how to have some fun with them!

The code is available on GitHub.