Around 15 years ago, I used to hang out in a German-language, Lord of the Rings-themed, part-RPG, early-2000s-style, PHP-based web forum – y’know, like any proper 11-year-old nerd with an internet connection and a healthy disregard for homework would, back in the day.

Apart from the usual off-topic areas available on most every forum, the bulk of the site was dedicated to role playing: The concept was that each user would embody a citizen of a port town, Harlond1, located just beyond the Grey Havens in northwestern Middle Earth, and you’d collaboratively write your way through your character’s daily life, interacting with other users’ characters and a few NPCs in the process, all through text and nothing but text. It was amazing.

The Harlond forum in early 2005, a few months before I joined – if I recall correctly, there were a plethora of background graphics that made the interface look somewhat less tabular (the whole site was <table>-based, of course; it was nested tables all the way down), but archive.org hasn’t caught most of them. Notice the “Optimiert für Microsoft IE” bit. The internet used to be a wild place.

Each dwelling or location had its own forum thread where you’d describe, in prose, your character’s actions while they were there. Especially diligent players would leave a link to their post in the thread for the place their character had been just before, and come back and link to their next post as well, all to ease navigation. Everything was delightfully low-tech and high-latency – if you were interacting with someone else’s character, days might go by until they’d write their half of the encounter.

There was a whole network of these towns, about a dozen, each on a separate forum, run by different folks, with overlapping user bases. If I remember things right, the smaller ones would’ve had a dozen active players, the larger ones closer to a hundred. Harlond was just about average, I think.

It’s all long gone, of course. Activity gradually2 dropped off towards the end of the aughts, and after a while, the domains began blinking out of existence. Many were subsequently picked up by shady domain parking services for a few years before even they realized that there wasn’t any profit to be made.

But I vividly remember that Harlond featured a page where you could click yourself, almost Myst-style, through a series of images depicting the town, starting out from an overview map. This walkthrough consisted of basic 3D renderings, which was fairly high-tech stuff back then. It blew my 11-year-old mind!

This regretfully-image-less overview map seems to be the only part of the walkthrough preserved by the Internet Archive. On a technical level, it utilizes an image <map> – high technology at the time – to link to detail pages with images of the places shown. If you go to that page, you can tab your way through the <area>s – however, none of the link targets still exist. The links near the bottom of the page led to pages with additional images.

These pictures were screenshots of a world that had been lovingly constructed in the TES Construction Set that came with the famed open-world RPG Morrowind, which had been released three years earlier. Using the construction set3, any player could modify their copy of the game world by placing buildings, objects, or NPCs; it also empowered them to morph the landscape; there was even a custom scripting language for making your extensions come to life. I wasn’t aware of all that at the time, and would only realize a year or two later when I got into Morrowind and, after quickly losing interest in its main quest, spent some4 time experimenting with the construction set myself.

But I digress. While using the fairly well-known wayback-machine-downloader script to try and retrieve equally-long-lost copies of websites I had built towards the end of the decade, I remembered Harlond. An indeed, archive.org had captured5 some of its glory – as you’ve seen in the screenshots above, it’s incomplete, with most6 of the content likely lost forever. But I thought that with some luck, the Internet Archive might’ve archived portions of the Morrowind-screenshotted walkthrough that had fascinated me as a child.

Having tried to re-find the images before, a few years ago, through manual Internet Archive trawling and searching the web, chances were I wasn’t going to find the lot of them. But: Once the batch download had finished, I sorted my way through my haul – and while neither what I remember was included (only the image-less page shown above), nor had any of my posts survived, three small pictures surfaced.

Which was enough for me – besides the entirely expected wave of nostalgia, there was an odd sense of accomplishment, a feeling of having closed the loop. 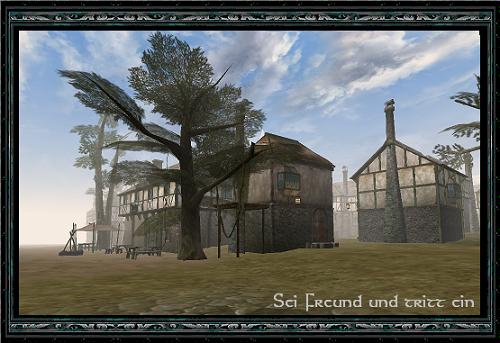